I am the Sixteenth Supreme Knight and Chief Executive Officer of the Knights of Peter Claver. The Most Worthy Supreme Knight was born in Mobile on January 22, 1977. I attended Saint Bernard Preparatory School at Saint Bernard Abbey in Cullman, Alabama and graduated from John L. LeFlore High School of Communication and Arts in Mobile. Having felt a call to the priesthood, I studied briefly at Saint Joseph Seminary College in Saint Benedict, Louisiana. A graduate of the University of South Carolina, Columbia College of Missouri, Touro University, and Saint Mary’s University of Minnesota, I holds undergraduate and graduate degrees to include an MBA in Public Management and a Master of Arts in Pastoral Ministries. 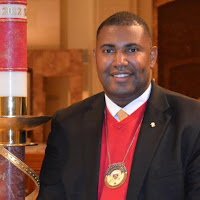 A Benedictine Oblate—a lay person formally associated to a particular monastery who seeks to live a life in harmony with the spirit of Saint Benedict as revealed in the Rule of Saint Benedict and its contemporary expression—I served in the United States Army Chaplains’ Corps. Military assignments include Fort Sill in Oklahoma, Fort Jackson in South Carolina, Redstone Arsenal in Alabama, and the Republic of Korea. In addition to my service in the United States Army Chaplains’ Corps, I have served as choral director, pianist, organist, or music director for various parishes throughout the Southeast and in Korea.

I believe the key to getting through to the youth is to meet them where they are, regardless of their stations in life. Love them unconditionally, regardless of their mistakes; and do not judge them. We must show the compassion of our almighty Father. A champion of Catholic education, I have endeavored to be a stalwart mentor to youth. Mariana Delany, a former student who is now a freshman at Vanderbilt University, said, “While teenage problems are often dismissed as melodrama, Mr. Blackmon would never ignore them. No matter how small the problems students took to him, he always gave them the respect of his attention, and made us feel, not only that we mattered, but that we were special, that we were human beings endowed with the dignity of God’s creation, entitled to love, respect, and attention.” In response to this, Ann Catherine Lopez responds, “I thank him for his love and his patience, goodness, kindness...yeah all that jazz. I love him so much and I'm pretty sure, he is one of the best things that's ever happened to me.”

F. DeKarlos Blackmon, OblSB
F. DeKarlos Blackmon is the Secretariat Director of Life, Charity, and Justice for the Diocese of Austin and a consultant to the USCCB Committee for Cultural Diversity for African American Affairs. DeKarlos has taught Scripture, sacramental theology, and moral theology. A much sought-after speaker about liturgy in multicultural contexts, pastoral leadership, and education, DeKarlos is actively involved in pastoral ministry, outreach, promoting civic improvement, and developing youth. He holds graduate degrees in pastoral ministry, business administration and public management. DeKarlos served as the Supreme Knight of the Knights of Peter Claver (2010–2016) and the President of the International Alliance of Catholic Knights (2015–2017).